read about what took place at QC Family Tree's Funeral for the Empire Jul 13, 2022 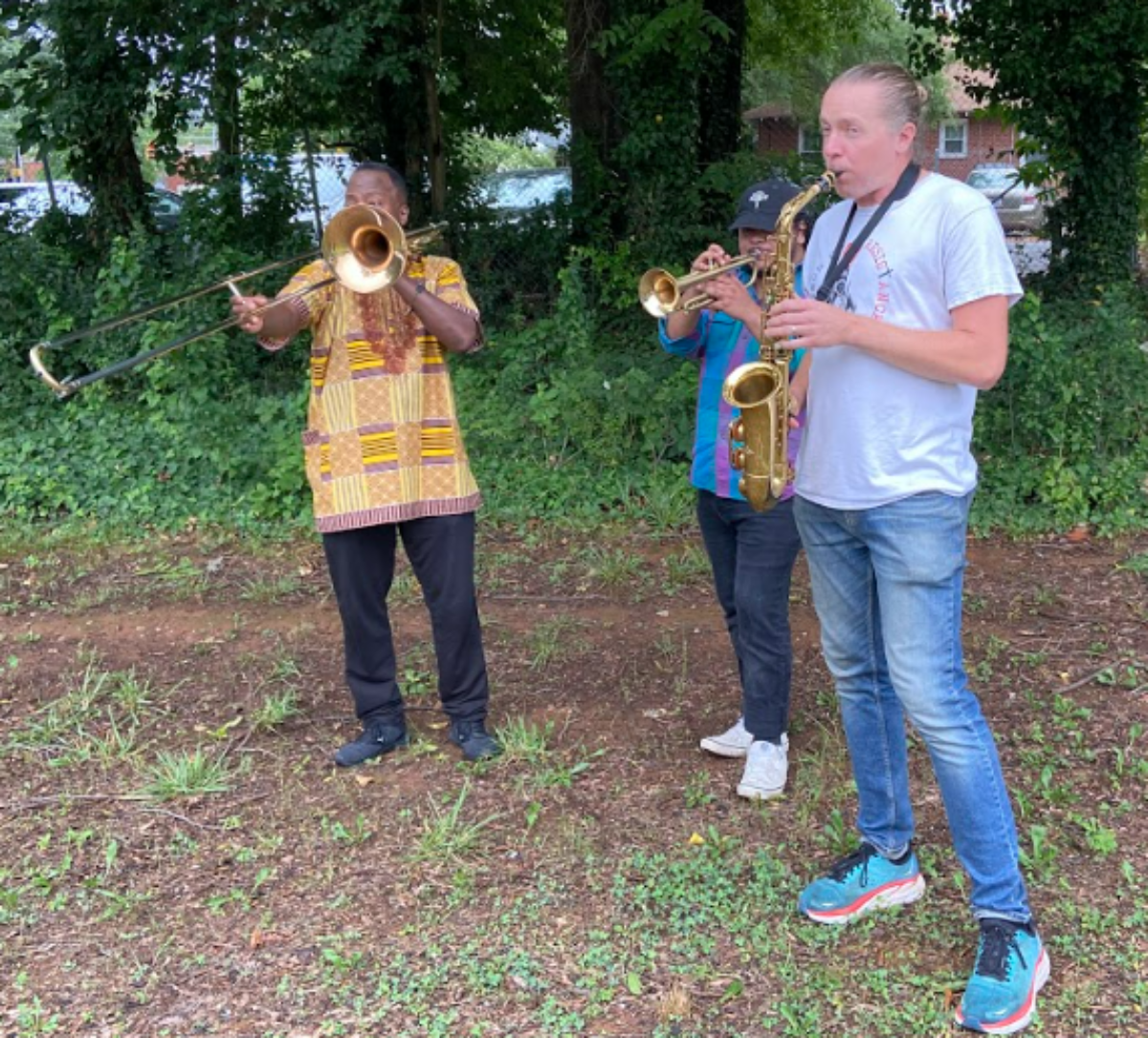 Christian liturgical and community calendars provide opportunities to take our most sacred observances to the streets so that we may bear witness to God’s presence among the oppressed as we speak truth to Power. This is a concept known as Liturgical Direct Action. Liturgical Direct Action is a concept written about by several theologians, including Bill Wylie Kellermann, Sojourner’s Magazine, and the Center for Prophetic Imagination. “What is the connection between faith and politics? ‘Every act of worship,’ Kellermann says, ‘every occasion where the sovereignty of the word of God is acknowledged, is always and everywhere expressly political.’”

On July 10, 2022, QC Family Tree and other community partners hosted a Funeral for the Empire. This liturgical direct action experience offered the opportunity for participants to speak boldly, in word and deed, the grievous experience of being citizens of a nation built on exploitation, totality, and extraction. It also gave an invitation for participants to put oppression to its grave by taking on practices of abundance, freedom, and common good.

Before the event began, Chase Tibbs and Greg Jarrell volunteered to write an obituary for the Empire, which served as the backdrop to the event.

Obituary for the Empire

The Empire, leaving nothing in its wake untouched, has died, it is dying, it will die. In its time, Empire was known by many names and personas across many cultures and lands. Among the most well-known of those names has been militarism, greed, white supremacy, capitalism, and colonialism.

Empire was often sneaky, however. It sometimes operated at the smallest level, infesting individuals and groups silently, through small, surreptitious patterns that have proven hard to root out.

Empire was cruel, it is brutal, its next death will be dreadful. Those who faced its worst brutalities often did not survive, and when they did, they lived with the consequences of the imperial culture of death for years.

Empire was known for fostering sentimentality in the subjects that avoided its worst treatment. They would say “think of the good old days,” or, l “things aren’t that bad,” evidence that Empire often worked by robbing people of their moral clarity. Those persons survived physically, but faced the prospect of spiritual death.

Empire is survived by many descendants, including Neoliberalism, the Doctrine of Discovery, Christian Nationalism, and their many offspring.

On the day of the Funeral for the Empire, guests were invited to begin by entering the Wake, a space and pay respects to the “family of the empire.” Folks viewed the artworks and listened to a curated playlist for justice. The casket for the Empire took up the center of the space. QC Family Tree Culture Bearers in Residence and members of The Underground, Bunny Gregory and Katrina Cherry, conceived of the funeral box art project with humor, irony, and righteous anger. They chose the apt symbol of a toilet covered in gold and jewels to represent the container for the Empire’s remains. Stephanie Vander Lugt, founder of Kinship Plot, created an opportunity for participatory reflection at the wake. On the casket for the empire was a question that read, “What does the empire leave in its wake?” There were ribbons and markers for folks to write their answer and tie onto the casket.

Next, folks were invited to take a poster off of the wall and to follow the band of musicians in processional toward the funeral gathering space. A somber song was played by Tyrone Jefferson, Ocie Davis, Ariel Mejia, and Greg Jarrell as participants marched across the street. Stephanie Vander Lugt invited participants to choose the posters that most resonate with them and to rip off pieces of the poster to place in the casket. As the music played, people giggled and growled as they ripped up the remains of Karen, Uncle Sam, Gun Violence, and all the others. Bunny Gregory shared a personal story of anger at the injustice of the pharmaceutical industry. She passed around a medication bill that showed proof that one months of one medicine costs upwards of $4,000. She proclaimed, “If you live in America, don’t get sick. You can’t get sick.” She expressed grief at the harm that is being caused and the disparities that people experience.

Shamaiye Haynes gave a powerful eulogy HERE during which we all got to say goodbye to the things that harm us. She preached, “The Empire forced us to resist love and embrace dominance and control others in their minds and bodies…the death of the Empire is the universe’s way of confirming to us that the Empire’s power was finite all along. It is confirmation that we have been in hell all along. Hell brings limit to goodness, fairness, love and peace.” The Eulogy spoke truth to power and proclaimed hope for the possibilities of a future of abundant community.

After the eulogy, Stephanie Vander Lugt invited participants to reflect upon the prompt, “The Empire makes me feel…” Folks were invited to write or draw their responses on compostable wildflower seed paper and to either place them in the casket or to plant them in the earth. Ahmad Freeman read Langston Hughes’ poem, Good Morning, Revolution. Here are some of the words from the poem.

We can take everything:

All the tools of production,

(Great day in the morning!)

And turn 'em over to the people who work.

Rule and run 'em for us people who work.”

From the funeral gathering, participants followed the band of musicians to the burial tomb. The casket was placed inside the tomb, shaped like an outhouse, made by Bunny Gregory, Ahmad Freeman, and Katrina Cherry. Stephanie Vander Lugt, invited participants to name what is opposite of the Empire. People were asked to come forward and nail the tomb shut while proclaiming loudly the opponents of the Empire. The children volunteered first and proclaimed, “Peace! Love! Kindness!” as they locked the Empire into its tomb. Others added nails while declaring, “Healthcare for all! Housing! An end to war!” Katrina Cherry certified the Empire’s extinction in her prayer saying, “ashes to ashes, dust to dust.” Angelia James recited the words of Lucille Clifton’s poem, Won’t you Celebrate with Me.

my one hand holding tight

my other hand; come celebrate

with me that everyday

something has tried to kill me

The musicians played a celebratory song as we followed them to the space for the repast. As a blessing before feasting, Angelia James read And Still I Rise by Maya Angelou.

Out of the huts of history’s shame

Up from a past that’s rooted in pain

Welling and swelling I bear in the tide.

Leaving behind nights of terror and fear

Into a daybreak that’s wondrously clear

Bringing the gifts that my ancestors gave,

I am the dream and the hope of the slave.

The meal, provided by Bitty Bites by Cathy Cherry, was tasty, healthy, and graciously served. Folks listened to music, connected with one another, played, and celebrated. After the feast, everyone lended a hand to clean up, move furniture, and take out the trash. We left feeling full of possibility and hope.