On Reparations: an introductory speech by Shamaiye Haynes Oct 13, 2022 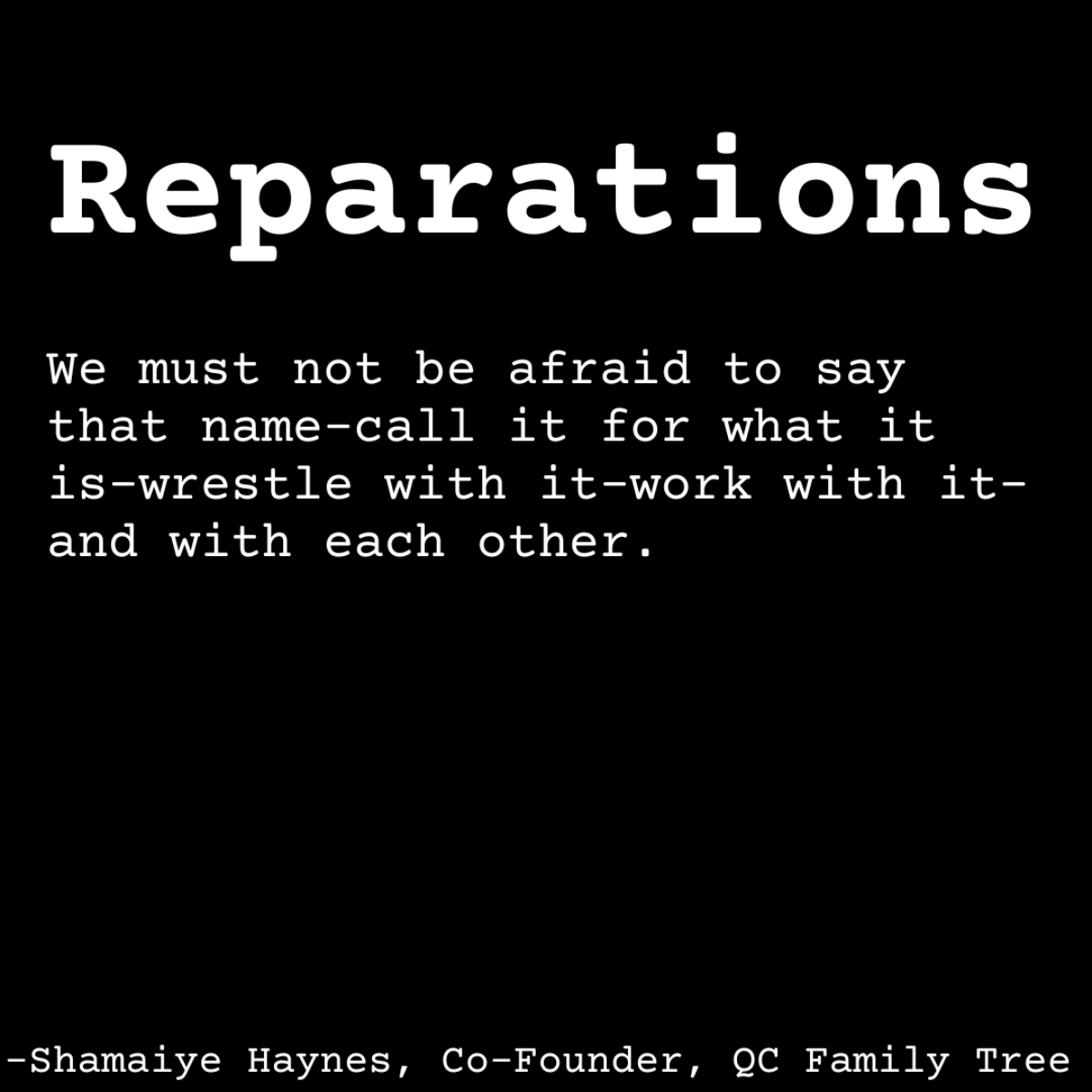 Recently, QC Family Tree co-hosted a 4 week series on social justice. The last week of the series was on Reparations. QCFT's Co-Director, Shamaiye Haynes was the moderator for the panel discussion. Here is the introductory speech she gave at the beginning of the meeting.

My name is Shamaiye Haynes and I will be your moderator for the evening. Some of you already know me for my work with QC Family Tree or The Charlotte Community Think Tank. I am very pleased to be here tonight because this kind of series represents the continuation of my mother’s life’s work and legacy. Forty plus years ago my mother along with other Black people began her own journey to bring about reconciliation by calling on American Society to pay reparations to Black Americans who are descendants of slavery. She has carried the torch of those before her and I am grateful to be able to explore that with you tonight.

Our first two discussions was to provide context to Systemic Racism and that it really is not about folks getting to know each other or a personal bias. Systemic Racism is about a group of people plotting, planning and executing to remove, displace, dishonor, and in order to create an environment in which it is nearly impossible for Blacks to obtain wealth in great numbers and live the American Dream. These systems of destruction extended from the pulpits on Sundays, Lending institutions, Corporations, and our government.

Last week we heard from clergy and though they acknowledged the church as a player in systemic racism. They were a little shy about speaking the words Reparations. We talked about a variety of potential ways to reconcile and yet, the words reparations were traded for alternate words like atonement, conversations, becoming aware. I can see why it would be tough to use the word reparations.

The physical plantation dictated the power structures in our relationships with one another and deeply kept us divided. The plantation has been such a powerful force in American Society that although physical plantations no longer exist the twisted, perverted, conflicted psychology that any man should have physical and mental dominance over another still remains intact. We articulate this as White Supremacy. We are blinded by the term without coming to grips with the machine that forged the immorality of slavery. The absence of the physical plantation leaves us with the desire and unscrupulous attempts to leave behind this gross immorality unscathed.

Dr. Martin Luther King, my hero and mighty peace bearer understood this far more than many do today. He believed that in order to stop the damage, to decrease the disease of systemic racism that White people had to come to terms with the moral obligation to reconcile the destruction wielded upon Black people. Black people had to make the sacrifice to move themselves to liberation of their minds.

The plantation dictated that for Black people to ask for what is justly owed to them goes completely against the will of the plantation. The guilt and anguish my people face in the eyes of oppression around asking and fighting and begging for justice has fallen on our shoulders just as the plantation and his next of kin systemic racism requires of a moral and unjust society.

You will hear from panelist that will share their views and educate us about Reparations. We will not be afraid to say that name-call it for what it is-wrestle with it-work with it- with you tonight!