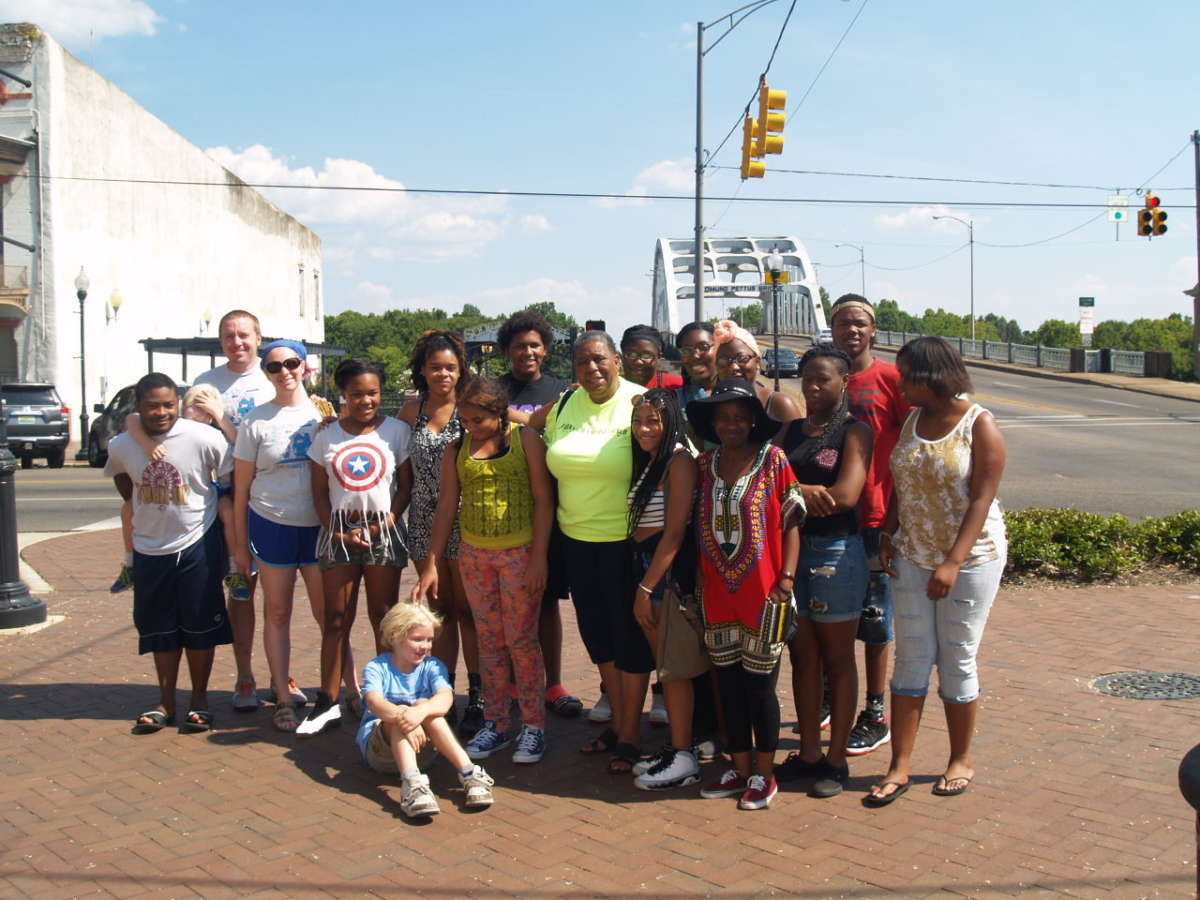 When you ask our youth what is their favorite day of the QC Family Tree Freedom Ride, many of them will say, “Selma!” To get to Selma, we backtracked a bit through what seemed like deserted roads of Alabama and arrived there midday to the temperature of 104 degrees. We parked directly in front of the Selma Interpretive Center, a National Park Service Site, where we met Joann Bland, a woman introduced to us by J. Charles Jones.

Joann’s warm and firm voice invited us to “Y’all sit down. We’re going to be here a while.” Then, Joann began to tell her story. At the age of 11, Joann joined the Freedom Fighters in Selma. She was a part of the two attempts and one successful march across the Edmond Pettus Bridge to Montgomery from Selma. Joann’s plain speak and her grandmotherly tone held the attention and hearts of our youth. She told us that the Civil Rights gatherings would often be held at churches and that only adults would be allowed inside. Children would wait outside the church doors, on the steps, and they would listen in for ways that they could be a part of the movement to protest police brutality and advocate for voter rights. Often times, the police would go to the church and remove the children from the steps. Joann explained that by the age of 11, she had been jailed a documented 13 times. As the youth listened with awe, Joann told us her first hand story of Bloody Sunday.

At the end of her story, she looked at the gathered group and said, “God made all of us, a rainbow of humanity.” She challenged us to be informed and to get involved in acts of justice saying, “Social movements are like jigsaw puzzles. Everybody has a piece. You’re the most important piece because you complete the picture.” Every clapped after Joann spoke and begged her for a photo.

After taking many photos, we left Joann and began our trek across the bridge. Traffic whizzed by very fast. The bridge is higher than we expected and the sidewalk is narrow. While the panicky (momma) member of our group was fretting about the safety of our participants, others of us were snapping group photos and taking in the moment with awe and reverence. On the other side of the bridge, we stood in silence remembering the horrible violence that some had suffered in that very place. As we crossed back over into Selma, we held our hands up as a symbol of victory and determination for the future.