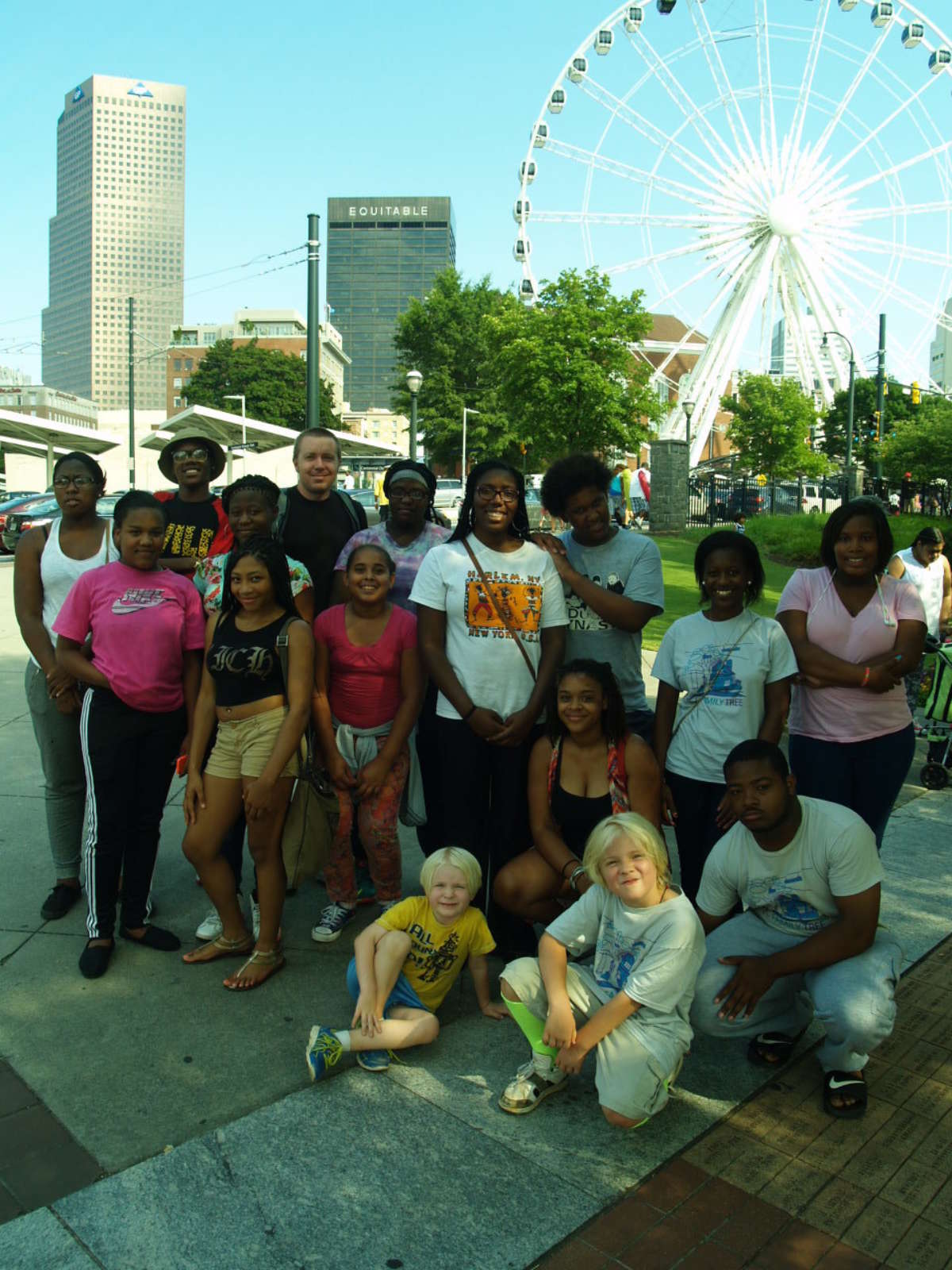 We have read, watched documentaries, and spent some time talking with one of Charlotte’s most important Civil Rights figures. The excitement has been huge around the house. After preparing for weeks, our Freedom Ride has gotten started.

We started out Saturday morning headed ro Atlanta. We found a nice spot a few minutes off the highway to enjoy lunch at Tugaloo State Park, just barely across the Georgia line. After a couple hours driving, a walk through the woods and a shady spot to feel the breeze were welcome respite. Being that we were nearing Atlanta, we then waded into some traffic, which was made slower by the cries of “Dad, I have to pee” from the back seat.

First stop: The King Historic District in the Sweet Auburn section of the city. Here we visited the National Parks Service display on Dr. King’s life. The young people especially enjoyed a short film with footage of him speaking and documentation of his connection to that part of Atlanta. Also notable was the cassion that carried his casket through the streets of the city after his death. 200,000 people showed up to pay homage, and to see his final journey in a beaten up cart drawn by two miles, a reminder of his deep solidarity with the poor and oppressed.

We also lingered a while in the historic Ebenezer Baptist sanctuary. Inside the building has been restored and features an audio loop of King speaking. In quiet moments, you can close your eyes and imagine yourself there with him, surrounded by the saints who have made that a holy place.

King and his beloved Coretta are entombed not far away. Throngs still flock there to honor this prophet and his family. The entire King site takes up the better part of three full blocks, perhaps more. Yet it is clear that the neighborhood around the district still is not a place full of justice. On one corner are a couple of abandoned houses. On another, a decrepit looking senior housing building. A yet another, a vacant lot with a tree fallen across a fence. Clearly it has been there for a long time, dried and cracking as it is. A burned out building is nearby. And across the street, a brand new apartment complex. It is built to give the appearance of being cloistered, shut off from the cries of the poor and deaf to the sounds of the prophet. The contrast is stark. We may yet overcome our divisions, but we have not yet.

Ready for some evening fun, we took the long way downtown, circling through Spelman College. Our intern Tarisai, who is a student there, gave us a tour of the beautiful campus. We then made our way to Centennial Olympic Park, though not before losing our negotiations with the parking lot attendant. We stumbled into PraiseFest, a Gospel music festival. Olympic Park and the area around it were full of energy. Among the things our young people noted were the large number of mixed-race couples, the energy of the area, and the proliferation of cowboy boots on young women who were decidedly not ranch hands.

We wrapped the evening with a swim at our hotel and a group practice of examen, giving thanks for all the goodness we had encountered together.

Sunday started with an early wake up call. We joined in worship and Eucharisitc celebration with the congregation of Ebenezer Baptist. Their new sanctuary sits just across the street from the older one, and it was full of life and energy. The music, directed by our friend Tony McNeill, was beautiful and moving. Pastor Dr. Raphael Warnock preached the last in a series on the fruit of the Spirit, highlighting gentleness and self-control. On everyone’s mind this morning was the act committed on their property Thursday morning, when under cover of darkness two men left four Confederate flags in various places. Dr. Warnock reminded us that had that flag prevailed in the Civil War, he would be a slave today. But when asked by the media on Thursday what he might say to the people who would commit this act that must be interpreted as an attempt to terrorize, he said he would tell them that they came to the right place. He would show them that they came to a place where it is possible to respond to your enemies with gentleness and self-control. This is the fruit of the Spirit. We cannot practice enemy-control, he said, but we can practice self-control.

Warnock also lamented that these acts are still occurring today, threatening black communities and black people. “If even our sanctuaries, which have been the rock and the refuge for our people, are threatened, where can we be safe?” he asked.

It was a joy and a refreshment to our spirits to join in worship with the saints at Ebenezer. We sang, “I don’t feel no ways tired, I’ve come too far from where I started from. Nobody told me that the road would be easy, but I don’t believe he’s brought me this far to leave me.” With this song ringing in our hears, we set out for Birmingham.