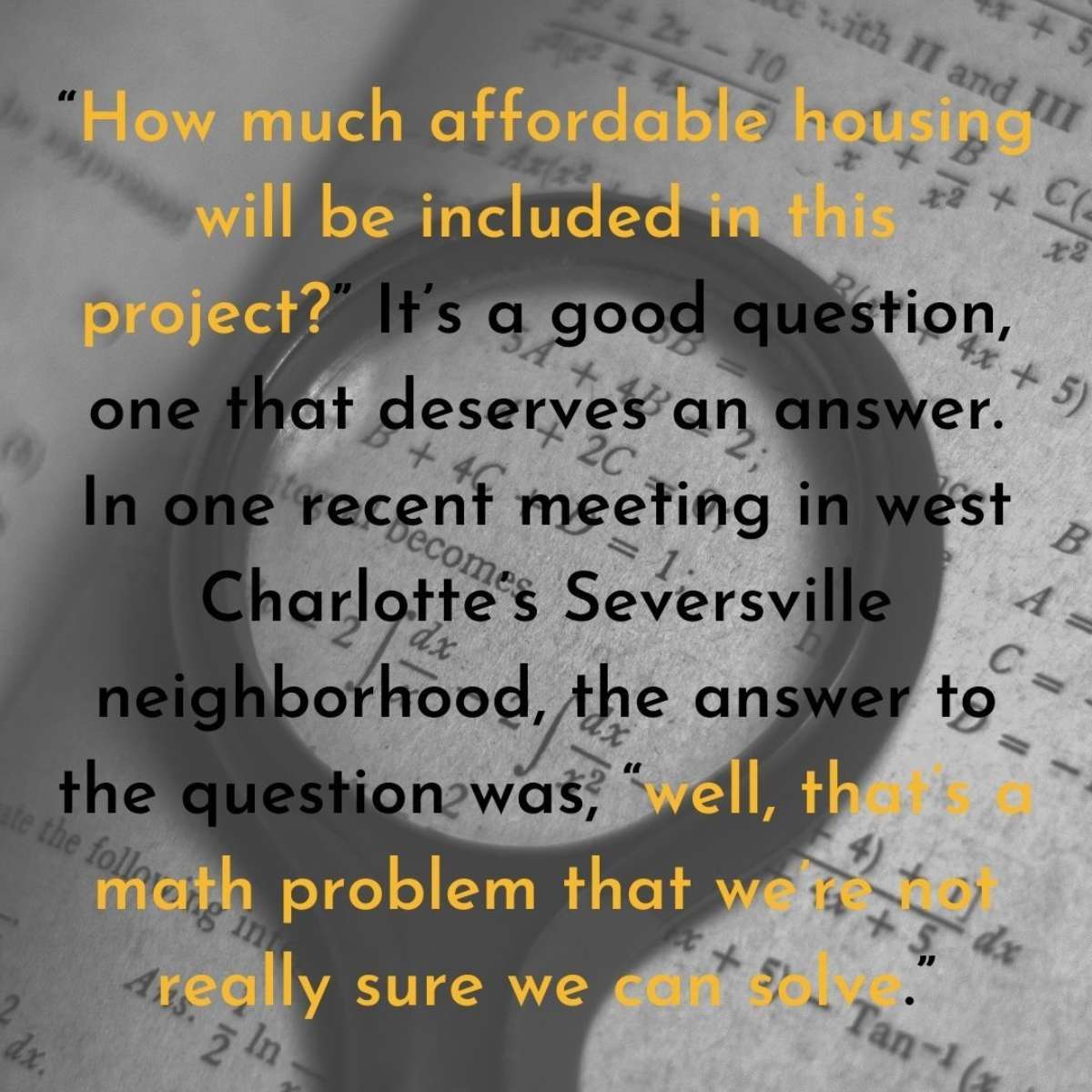 We have a friend who is a math professor at Winthrop University. He keeps trying to convince us — pastors and theologians — that math is actually quite simple. To solve a problem, Prof. Polaski says, you have to keep in mind what you can do. You can solve for one variable. When there are multiple variables, you can’t solve the problem so much as you can find a range of answers. Your goal in a complex problem is to find the least wrong answer when no perfect one exists.

We’ve found the professor’s words ringing in our ears lately. We’ve heard lots of presentations and commentary from developers in Charlotte about the future of the city, and the discussion inevitably circles back to the affordability of housing and neighborhoods. In every public meeting, people ask developers and builders some variation on the question, “How much affordable housing will be included in this project?” It’s a good question, one that deserves an answer. In one recent meeting in west Charlotte’s Seversville neighborhood, the answer to the question was, “well, that’s a math problem that we’re not really sure we can solve.”

What the developer speaking meant was something like, “This is complex.” And surely it is, as there are many variables involved. Have you seen the price of sheet of plywood? Labor costs are high. Land costs keep going up. Demand for housing in Charlotte keeps rising. Wages have not increased to match rents. Everyone is having a hard time manipulating all the variables.

Prof. Polaski’s dictum stands as an important reminder. Math is not complex. To do it well, keep it simple. Solve for one variable. Find the least wrong path. You do the best you can to meet the conditions the one variable requires, and use the other variables to help in finding the answer, but not to drive the solution. If affordable housing is the important goal, you work on how to get the other costs down.

Every housing project includes various costs, including the very real social costs of the housing choices our society makes (or doesn’t make). And, the other cost factored into every new project is developer profit. Surveying the landscape of Charlotte, you can see that the variable we’ve spent too many decades solving for is developer profit. And the variable we’ve long tagged on as an afterthought to every equation is the cost of social goods like integration, diverse transportation options, including walking, and the cultural integrity of historic places. The result is the inability of Charlotte to produce a city of livable neighborhoods rich with opportunity for everyone.

City staff, elected officials, and residents are currently debating the future we want for this city through the tool of the 2040 Plan. Much debate has gone into one segment of the Plan, regarding Community Benefits Agreements (CBAs). Widespread use of CBAs would prioritize the needs and desires of communities, especially Black ones, as redevelopments continue across the city. Currently, Black neighborhoods rarely get a seat at the table, and almost never see any of the profits generated from their spaces. CBAs could change the decades-long practice of extracting wealth from the historically Black neighborhoods, and instead would honor and prioritize self-determination for those neighborhoods and the neighbors who live in them.

One recent example of trying to solve for the wrong variable came in Councilmember Bokhari’s April 22, 2021 town hall meeting regarding the 2040 plan. In joining developers to push against CBAs, Bokhari asked, “what do [CBAs] do to the affordability of housing … if we start using them in more widespread and much smaller [situations]– not the usual high commercial complex deals?” What Bokhari’s entire town hall meeting did, including the quote above, was try to solve for the wrong variable. That variable is developer profit. , and Bokhari made clear his concern for privileging private interest over public good by carving out extra space for developers to speak in the public forum of that town hall, while not affording that same space to other citizens.

Unsatisfied with their privileged position in public discourse and policy production, the developers’ special interest group, the Real Estate and Building Industry Coalition (REBIC) is now spending six figures on a campaign against the 2040 Plan. The plan is too costly, they claim. But too costly to whom? Well, that depends on what you think is most important when you do the math.

The math is simple, the kindly professor reminds us. You just choose which variable to solve for. As Charlotte continues more than a century of consistent growth, we’ve not yet found the right answer to how to build a city that works for all of us. The debates around the 2040 Plan, and the CBAs that are part of it, offer the opportunity for a new solution: solve the problem for those who have been left out, forgotten, and marginalized, and you’ll have the best possible answer.